Dark Knight gets a new Mommy...miracles really do happen! 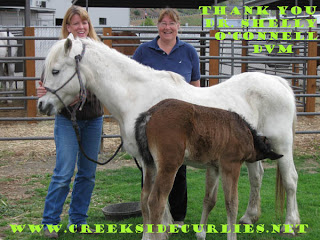 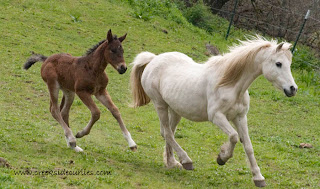 After we lost Sage, we had another serious problem...a 7 day old foal who needed help and needed it quickly. We tried all the usual methods for feeding an orphan, tubing was the most effective, but time consuming, risky, and not something that would be doable long term. Dark Knight had enough time with his Mom, Sage, to know that milk came from a Mommy, not a bucket or a bottle, and he refused both those methods in a rather opinionated manner.

Time was of the essence here, and we put our heads together, the team helping to care for Dark Knight. Mike and I decided that we would bring our mare Krinkle Clown in the the vet clinic. She still had milk from our month ago weaning of her colt "Tyler"...in fact, that mare has milk most of the time inbetween foals. We prayed that she would make a nurse mare, or at least buy us some time to find a nurse mare. Krinkles let Dark Knight nurse, but only if we held her and corrected her with our voice if she got crabby with the youngster...though I was thankful he could nurse, this was not going to be our most suitable canidate. I have to thank her though, with her milk she kept him going until we could find our miracle. Our miracle came in the form of a mare that needed her 2008 foal weaned.....the mare, owned by our very own Vet, Shelly O'Connell DVM had been nursing her last years colt and Shelly had not quite got that foal weaned yet. So, we brought in "Addy" and after a bit of fussing with Dark Knight, she seemed to accept her new job. We left the clinic Thursday night wondering if Addy would allow Dark Knight to nurse, unassisted from any human handling/contact.....I barely slept....would it work? she seemed willing enough, but frankly, this is asking a WHOLE lot of a mare, to accept another mare's foal. Just having the option of this mare was a miracle in itself. Finding a nurse mare in a timely manner is not an easy task, most mares will not take another mare's foal, most mares are not in your area, and transporting a 7 day old foal, whose only substance is tube feeding every 2 hours, just to find a mare that may or may not take him was a risk that could not be taken.

Friday morning when we came to the clinic to check on the pair, they were out on the grass area together...Dark Knight was stretched out for a nap and as we approaced he jumped up, headed to his NEW Mommy, hit the milk bag and filled his belly. Totally unassisted, totally accepted...our miracle was truly a miracle after all. The best part was when Addy guarded him from the other horses, that is the sure sign that the "graft" ( that is what the vets call it ) would work. She has accepted him as her own.

We brought Addy and Dark Knight home on Saturday. Addy is so kind, she even lets him share her grain pan. She lets him nurse at will. For a youngster this age, it can be up to 6 times an hour, and that is if he does not get scared or upset, that will trigger additional nursings, nursing for comfort.

I might have forgotten to mention, Addy is a Welsh pony mare. Dark Knight stands pretty tall next to her, and he can lay his head over her back and just be in pure bliss. It was a tough week for him, tough week for us all. We will continue this relationship with a guarded optimism. Dark Knight is getting milk and grain supplements, as well as Addy. They had a wonderful romp around the pasture, when they first arrived here....both happy and content. Addy will teach Dark Knight things we simply can not do as humans. All our attempts to make him drink from a bucket at the clinic were not successful, I cried when I watched her drink, and then he mimicked her drinking up his first taste of water. A Mom is what youngsters need, and Dark Knight has a new one that will love/teach and care for him. Yes indeed, this is a MIRACLE!
Posted by Linda @ Creekside Curlies at 9:08 AM