Leacy goes for a drive 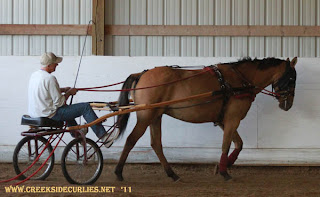 Trainer Roy and Legacy went for their first drive late last week. Shown here at the walk and the trot, Legacy handled the mental pressure with ease. 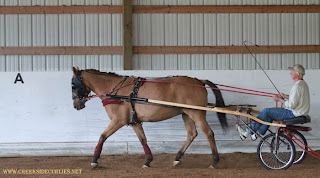 I have also been taking lessons, using a retired Grand Champion Morgan schoolmaster, that is amazing to drive... 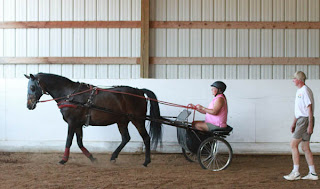 Driving him is like floating on a cloud. Last week in my lesson, we did not kill ANY cones !!! Driving is more fun, than even my great expectations...and I had great expectations......a sport truly meant for me and my curly.
Posted by Linda @ Creekside Curlies at 2:35 PM No comments:

Keen Green transforms to "My Beamer" 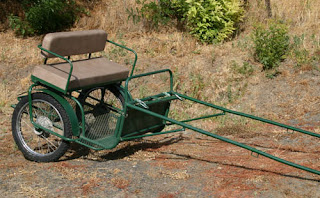 What a journey my dream of having my very own driving curly has been! I spent a year studying driving "book learning" and then started my search for a cart. I found this cart, somewhat local, it was a bit wrong for my purpose..BUT..it had good bones. I have the luxury of having a cart builder near, and last fall, he took the cart, measured my horses and went to work to make it fit. 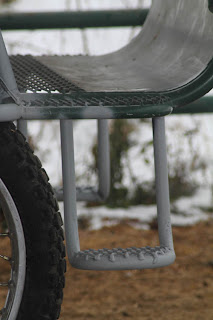 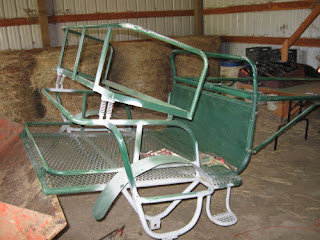 Once the height of the cart, the step added and the shafts narrowed to fit my potential driving horses I got my cart home and I started the rest of the transformation A good paint job helps clean things up. 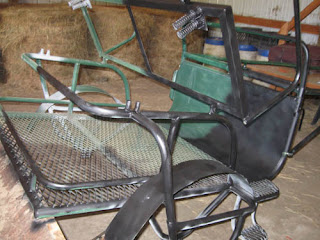 Although I like the color green, it was not my goal to drive a green cart. So, I bought black paint, and spent a week of the hottest summer weather transforming Keen Green. 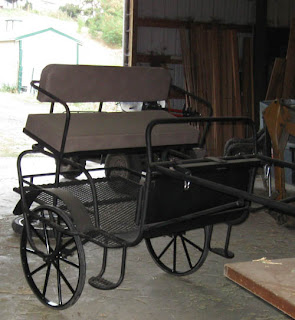 The next thing that needed to be changed was the wheels. Some folks use motorcycle ( or even bicycle ) wheels, but my limited knowledge was both types were unsafe, out on the open road..they are also not legal for competition at certain levels. So, I spent another year searching for first motorcycle wheels with out the spokes, and then when I hit a dead end with that...searching for steel wheels! and...after weeks of searching, I found my dream steel wheels at www.carriagedrivingessentials.com and they had the wheels in stock! so...my dream cart is complete...and WHY do I call it "My Beamer" ???cause, when I am sitting in my cart..I AM beaming ;-) 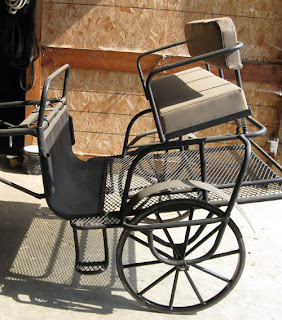 Posted by Linda @ Creekside Curlies at 9:46 AM No comments: 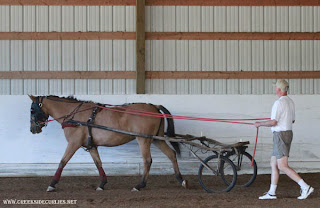 Last week I had the pleasure of checking on how Legacy was coming along with her harness trainer. She has advanced to pulling a cart, and in a few days, Roy will be in the cart driving her. As you can see here, she is comfortable, happy and relaxed...woohooo!!!!!!!!! my "gal" coming along ..... 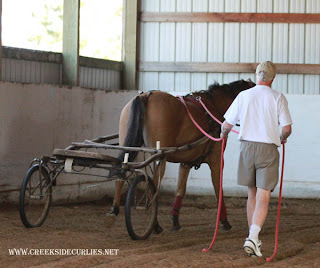 Corners are always a challenge with a green horse and cart...but Legacy takes it all in stride. 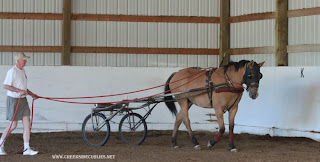 And...another shot of her showing how accepting she is of the whole process....soon, we will be in that cart! 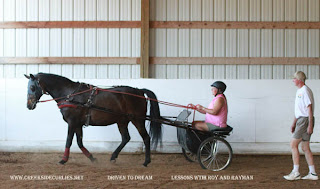 While I was there, I jumped at the opportunity to take a lesson. 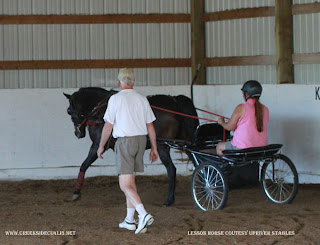 Roy gave me alot of guidance.....my lesson horse was a gentle guy, with LOTS of get up and go, if you wanted it. I actually thought I would not break out of the walk, while I was watching Roy warm up "Ray Man" but...after I settled into driving, we did indeed up the speed! I felt like I was flying on a cloud!!!!!!!!! wow..what a rush ;-) 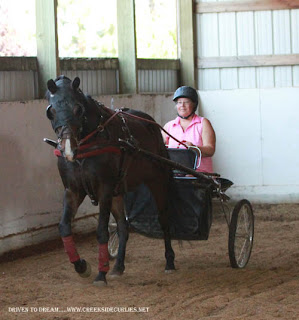 Here we are all "alone" LOL.....while it may be somewhat easy for an instructor to run up and catch or hold a saddled horse, it is not that easy to catch and hold a horse that is hitched...so, we had to "fly" on our own....what a great feeling ;-)
Posted by Linda @ Creekside Curlies at 9:58 AM No comments:

Flashlights in the Night

On my FB page, I wrote about spending yesterday, preparing food for the family of a dear neighbor. Gordon was truly a member of the "greatest generation" he was 88 when he passed away late last week, and a one of the happiest, most content people I have ever met. Here is one great story about Gordon.

One winter night, Mike and I noticed flashlights on the hill across from the house...Now..it had been dark for hours. and our we wondered who on earth would be on the hill, muddy and slick from recent rains, at this time of the night...esp with just a flashlight.

We watched the flashlight's beam...all over the hill it seemed to go, searching perhaps? a lost hunter perhaps? or .......wait a minute...it is Gordon! Yes, Gordon was on the hill, walking the area looking for a lost calf, in the late night, in the mud, on the steep hillside that is so slick when muddy, most of us don't ever attempt such a feat....But...Gordon was out, looking, searching for one of his precious calves...we found out later, he did indeed find the calf.

This was one of the first experiences we would have watching Gordon on the hills around our home. The man could walk...that is a simple statement, but there was nothing simple about this man's ability to walk.

When Gordon was 79 years old, he was convinced by family members to quit his bi annual trek of cattle driving his cows to summer pasture...it was well over 30 miles, and Gordon did not ride a horse, Gordon walked...every speck of the way ;-) I don't know many people that can walk 30+ miles in a few days, Gordon never seemed to be bothered by the task at all...It was great fun for the Grandkids, but Gordon was finally gave in to family members, perhaps the cows should be trucked to summer pasture.

Cattle drives are a common thing on our country road. Gordon, his son Clark and his 2 Grandsons move their cows often. From here to there, there to beyond there and back....many afternoons were spent watching as the "guys" moved their cows....always done by foot, never by horse or other "machines."

In the last few years, Gordon had taken the role of "lookout" instead of actually walking, but he was very fit, never the less. If you saw Gordon on the top of our place, coming from pasture they have above our pasture, he would beat you to the back to the house, and that is if we were using the 4 wheeler!

The day before Gordon passed away, we saw him in his garden..he no longer planted the garden, the kids did it for him, but he love to tend the garden, we honked, and he waved and smiled....he died during the night.

That smile will always remain in my mind.....rest in peace Gordon, and keep moving those cows!

Posted by Linda @ Creekside Curlies at 4:56 PM No comments: