Being a leader - the secret of horsemanship 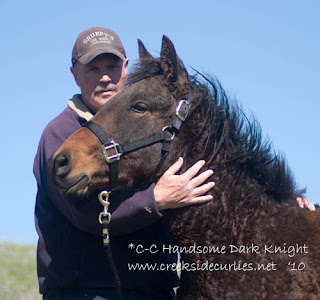 What if I told you that the real secret to horsemanship is a tiny fact. Could it really be a simple thing, after all, there is a whole industry trying to help you develop your horsemanship....is there something they are leaving out?

To those words, I would reply..yes, horsemanship is a simple thing, so simple in fact, you probably have never really thought about it.

All of us want a great bond with our horses, but many times, we fail to communicate on a horse's level of understanding. We often hear how we want to have our horse, be our partner. Well, that is in error, we don't want a partnership, a partnership would imply that our horse has a 50% part of our relationship. The wisest horsemen/women, instead refer to this relationship as a "team" A team has something a partnership does not. A team has a clear leader. A partnership implies that each member has an equal share in the matter...look at it this way. When you come to a fork in the road, do you let your horse decide which way to go? If he is a partner, then he should have a say in deciding which path to take...but if you are a team, the team leader would decide which path to take....am I making sense yet?

So, My horse and I are a team. How can we advance our relationship? One of my favorite things to help my horse see me as the team leader is to let my horse hand graze. Simple enough, I take them out of their pasture, pen, stall, whatever, and let them eat grass....very simple indeed! but did you know there is a proper way to hand graze, and doing it the wrong way can make your horse think he is in charge of your whole relationship?

Hand grazing is done alot here on our farm. We seem to have lots of spots with good grass, and no access to those spots for the horses..I just enjoy hand grazing my horse, and I like to start my youngsters in this exercise as early as they are weaned. To be a leader and to correctly hand graze, you must lead the team. You must move the horse to you, not let him eat and wander wiley niley all over the place dragging you behind. IF you set the rules for hand grazing ( you must follow me horse, I make the plans here ) hand grazing becomes a bonding tool. If you let the horse decide which area to move to next, with no regard for you, you will find out quickly that all other commands you ask of your horse, will be ignored, or at least argued with.

Hand grazing is a tool we can all use, any horse, any age, any place ( as long as there is grass ;-) Next time you take out your horse, let him/her hand graze and practice being in the team captain role...you will be amazed at the difference it makes in your horsemanship!
Posted by Linda @ Creekside Curlies at 2:28 PM 1 comment: 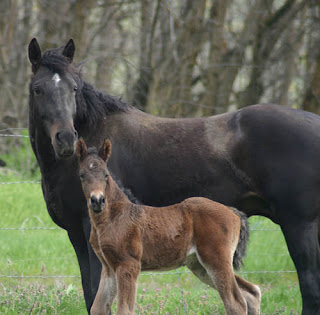 Darkie and his Dam....DKH Black Sage
Earlier this week, we delivered *C-C Handsome Dark Knight to his new owner. "Darkie" is a long yearling gelding, sired by our former ranch stallion "*Shadow's Hawk Spirit" aka "HeartBreaker" ...( he stands in Canada now ) .....out of DKH Black Sage, a mare we lost to colic when Darkie was just a week old. Darkie joins a mare we sold these folks a while back, and will grow up to be a stellar trail horse. He is pictured with his Dam, the black mare, and his adopted Mom, the white pony, and a head shot from last winter.... 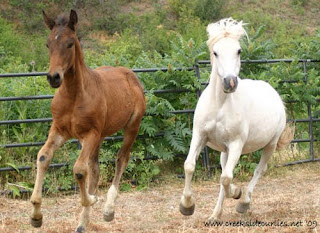 Darkie and his Nursemare Adopted Dam ..."Addy"
Here at Creekside, we have often delivered horses to their new owners. If it is a reasonable mileage trip, we often do our own hauling, it saves the buyer a heap of money, and is VERY good customer service. We planned this haul for a weather break, and felt comfortable with our trip plans.....the only thing I can say is....Don't trust the weatherman !!!

We left home before daylight, and a few miles into our trip it was apparent it would not be an easy haul. 60+ MPH winds beat on us the first 100 miles...the 2 nd 100 miles we had icy roads and snow, snow and MORE snow.....

We actually arrived just a couple hours late to our destination....Darkie hauled well, and was anxious to see other equines at his new home. His owner put him in with a 3 month old orphan BLM filly...with a real attitude..she marched right up to Darkie, stomped a foot, turn and kicked at him and did all sorts of funny dance moves to show her dominance....Darkie just smiled ;-) he is used to "little" bossy girls....LOL...when we lost his Dam, we were fortunate to find a nurse mare for him..an 11 hand pony! He has also been exposed to all the 2010 babies since they were born, and Darkie is a very gentle soul, not a mean bone in his body...I can not wait to find out how long it takes for the two of them to be roughhousing and grooming each other.

So, there is yet another curly in an awesome home, that will be used and well loved ;-) The gentleman that bought him considers Darkie his "own" and is looking forward to the journey of youngsterhood, to finished horse. 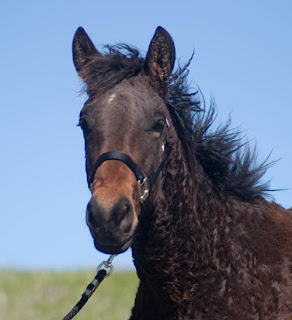 Darkie in his winter coat......handsome boy!
The trip home made the trip there look easy...boy, semi trucks look alot bigger when they are on their side......we made an unplanned stop for the night...after 14 hours of driving, we were just worn out. We arrived home the next day, that drive as about as impressive as the rest of the trip had been. We later found out, the road closed behind us ....and traffic stood still for hours...I often hum to ease the stress of winter driving...everything I can think of, "Blue Skies", "White Christmas" such things...after we passed the semi wreck and the stalled, jackknifed semis, I turned my humming to hymns, something along the line of "To God be the Glory" my moto for our safe trip in a world of really bad weather.

But...all in all, a successful, though stressful trip, and a curly in a home that will cherish and grow him up...nothing better for a curly horse breeder!
Linda
Posted by Linda @ Creekside Curlies at 11:16 AM No comments: