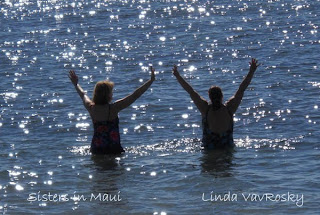 A couple years ago, my Mom approached my Sister and I with her idea...she wanted to take all of us to Hawaii !!! We kind of put the idea of such a trip into the future, as her health was not that great, and on such a trip, my Sister and I would have to face some major fears, and overcome some issues.....but...early last winter, Mom told us not only were we booked on a flight to Hawaii, BUT we would also then be getting on a cruise ship to cruise the Hawaiian Islands....

For a couple of well known seasick daughters..that was a bit of an issue....one we would have to face in a hurry! So, facing all our fears, and carrying with us prescription seasick patches to use...we headed on a vacation trip of a lifetime.

Since we did not really know what our own schedule would entail, and how Mom would feel physically, I spent some time finding out about some activities we could do on the Islands....I made us a potential itinerary for each day, hoping we would be able to do things....travel time, location, costs all came into factor, as there were days we had to be back on the cruise ship fairly early in the day...we would not want to miss the boat ;-)

Our first stop was Maui.......the first day of our cruise, we made plans and headed to LaHaina on Maui...We found us a nice little beach and one of my favorite pics from our trip was taken there.

As were walking to that beach, we passed a Church.....the congregation was rehearsing ....the music coming from the open doors of the church was just beautiful.....we could not understand the words, but the effect of the words and the music was both stunning and surreal. We played at the beach, boarded the bus for the long trip back to our ship...

Monday was a special day....I had booked Sally and I a horseback ride on Maui.....some folks think this was an odd thing, as I can ride any old time here at home...but...riding on Maui with your Sister just seemed pretty dang special to me ;-) 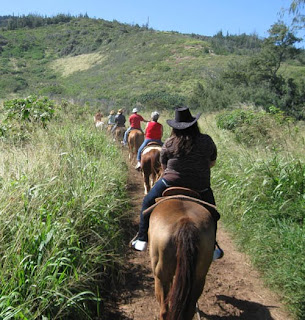 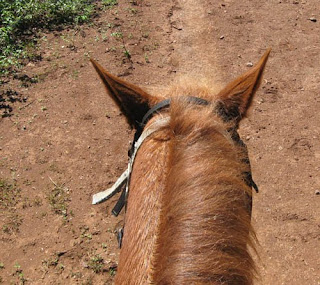 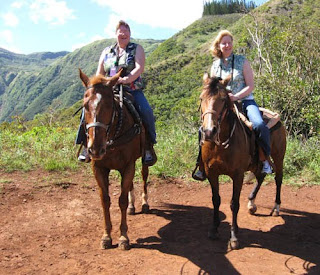 Sally and I spent many hours riding together as kids and this just seemed like a way to make this trip extra special...so, off we went...Sally got the "good horse" a mare named Billy..and I got the nameless horse..who I promptly named "Poke"...he only had one speed, and it was a snails pace...but we completed the ride never the less...and made memories riding into the rainforest and overlooking Eki Crater...we also rode down to the beach where I took this pic, another one of my favorites. 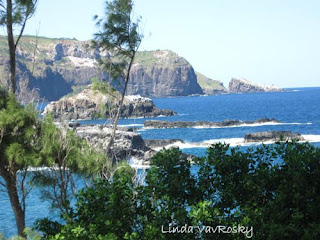 Tuesday was our day to go to the Hawaiian Botanical Gardens.....this place was AMAZING !!! 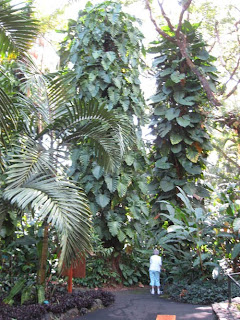 This is a pic of Mom standing near one of the trees....I think this pic says 1000 words !!! I have yet to edit many of my flower pics from here, but the whole garden was like being in a rainforest movie...the size of the plants/trees were just way beyond words.

Wednesday was Kona day...Sally and I prowled the streets Kona...we took the shuttle to "Hilo Hatties" a Hawaiian store....at each port they have a free shuttle to the local Hilo Hattie store....what a great marketing tool ! We shopped and found some treasures to take home. We later dipped our toes in the water, we had forgot our swimsuits, so we could not swim, but we cooled off with a good toe dip.

Thursday was my day. I had booked a Photography tour . This tour was a 5 hour tour of the Island of Kauai. They took you to the best spots to take pictures. It was like having a best friend that lived on the Island and would take you from spot to spot to see the scenery and take pics. Most of those pics, however, reside on my laptop, due to a computer glitch....so....I will have to share those at a later date. We visited several beaches, a light house, had a plate lunch at a local food truck, and had a very good time. Nice to spend time with folks interested in photography.

Friday morning early, we headed out to see more of Kauai...we visited another botanical garden at the Marriott Hotel, and played on their beach..( all beaches as public ) we got that one photo we were after...all of us in the waters of the warm Pacific....standing in Hawaiian waters. 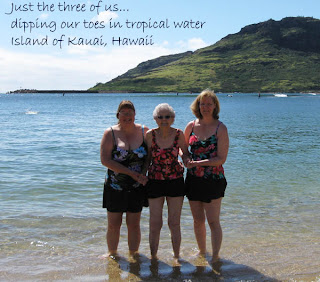 Friday our ship left port early in the afternoon...we then cruised past the Na Pali coastline..it is only accessible by boat or plane, there are no roads in this area.....It is an amazingly rugged coastline....and...much to our delight, there were many whales and dolphins playing around...the dolphins loved having the ship there and played close at hand....this is one shot of the Na Pali coastline. 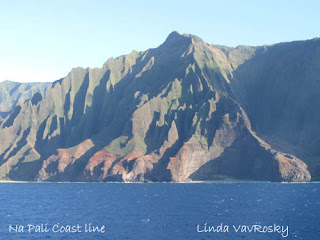 Sally and I did many of the activities on the cruise ship also....we made leis, we made good use of the hot tubs, we listened to piano music, we shopped....we had a really good time...and last but not least...a pic of the three of us taken on the ship....aloha !!! 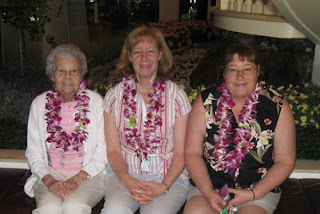 As we left Honolulu, I managed to snap this shot...just to prove I really WAS in the air and OK with it....a long flight home ( 6 hours ) but a happy husband met me at the gate and we made our journey on home......our trip was very memorable and a great accomplishment for the three of us. 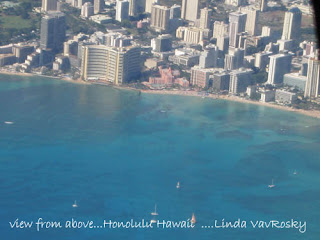 eye candy for your mares! 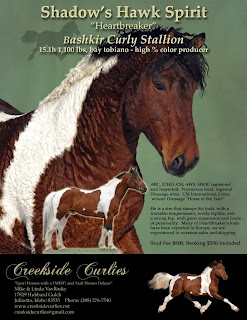 For all of you out there that own mares....curly mares or any other breed mares..here is a little inspiration for them ;-) We have painstakingly raise this stallion to be the best he can be...and believe you me...he IS good...LOL...just ask him! We will be taking a very limited number of outside mares via AI only, either fresh or frozen...HeartBreaker will be back in the show ring from May through the summer! Exciting times here, several quality foals due in March, and the chance to get this spectacular stallion out in the public again!
Posted by Linda @ Creekside Curlies at 4:23 PM No comments: 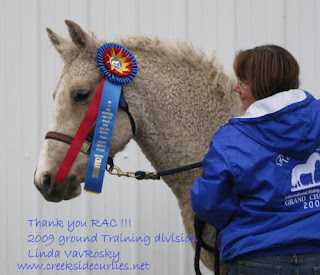 Thank you Denise, thank you Curly Horse Country ......www.curlyhorsecountry.com for another awesome year of "Ride a Curly" competition! 2009 found me with a whole lot of opportunity to RAC up ground training time, so I put my time and skills to good use. I was totally jazzed when I discovered that my time and effort in competing in the 2009 RAC Ground training division of the RAC competition had brought me a VICTORY !! and to the victor go a pile of really nice spoils...a lovely ribbon, and a wonderful jacket. At first I thought the logo on the back was all there was on my jacket...but when I put it on, I saw my OWN name on the front, along with more RAC info....

Denise does such a splendid job of inspiring us to learn, make goals and compete in RAC. Her efforts do get noticed, and now, when ever I head out with my jacket on, others will notice too...I suppose I can not pack my ribbon everywhere I go,
Posted by Linda @ Creekside Curlies at 9:45 PM 2 comments:

Twice a year we have a "vet day" here...Spring and Fall

In the spring we do EVA testing for our stallion, give him his vaccinations and have his teeth checked. Then comes the mares...all mares due to foal in the spring get all their vaccinations ( except WNV - which I still resist on..due to data ) and a Selenium shot. Yesterday was Legacy, Ally and Krinkles....Krinkles did us proud by being the best patient out of the three, just routine for her I guess.

Kallie had a full dental exam. She had her wolf teeth removed, in prep for her going into training this spring, she had WNV, regular vaccinations, and had 4 caps pulled off during her float procedure. All our horses are given stangles vaccine also..... so, spring work is done for now...

In the fall, we go through the same process, except the horses are then the new weanlings.....we keep all our herd on a reliable schedule, it helps alot with keeping them all healthy and feeling like a million bucks....

Kallie is not feeling like a million today...poor girl..those wolf teeth were miserable...it will take a few days for her to heal up... The caps came off fairly easy..but those wolf teeth were no near so cooperative..and the right side one was HUGE!
Posted by Linda @ Creekside Curlies at 9:42 AM No comments: