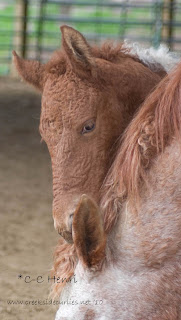 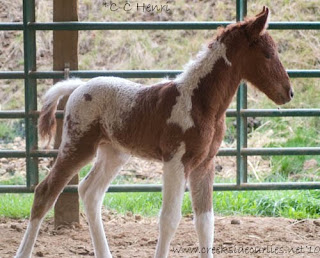 Last Saturday evening we welcomed *C-C Henri" to the ranch! I have been waiting several years to use the name "Henri" I needed just the right personality, and of course, a boy to hang this name on. This guy was it! Henri is somewhat of a plain name, but the personality of this colt will make a big impression. Krinkles foaled at the lovely hour of 7pm..right between when I looked out the window to check on her, to when I returned a couple minutes later....she was already up and ready to be a Mom....I could see long white legs from my view, and I headed out to put the rest of the pieces together....Mom and Son were doing well, I patiently watched as Henri made his attempts to stand, and kept an eye on Krinkles. She had not "cleaned out" as quickly as she usually does.....so, at 10 pm, I called the vet( I figured better 10pm to do this, than 3 am ..LOL ) and we worked to remove the placenta. Henri was a mere 3 hours old, but he was SO interested in all the vet equipment, and what was going on..and then he was busy bucking and playing around....MR personality !!! It was so cold out, I blanketed him . We finished our "job" about midnight and I climbed into bed at , I think it took me an hour to unthaw..but it was well worth it! Once again our vet comment on Krinkles and how her body condition does not seem to match her age....the last teeth float we had done on her, the vet commented on how her teeth looked like she was 10, not in her 20's ..apparently her repro track is the same.....so, another successful foaling here at Creekside, and time for some sleep! 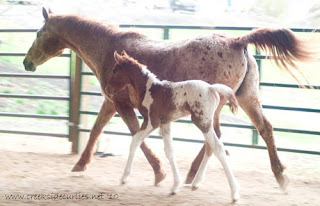