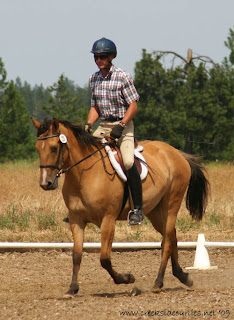 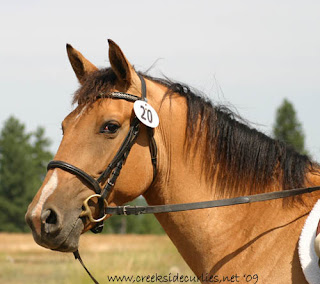 All my horses are at home now....for a bit at least, as we hopefully will be taking HeartBreaker up to Trainer Mike for a late summer/fall training and showing season. We gathered up the foals that were out away from the ranch,Hattie had been staying with a babysitter, while I took a few days off, and I also brought Legacy home from Trainer Mike after our show last Saturday. Trainer Mike rode her in an Intro A test, and then we switched to the next step up and rode her in a Training Level 1 test..... That second ride of the day produced BLUE for Legacy and Mike, winning the TL 1 test class....Trainer Mike had been working on Legacy's canter, they handled it just fine for a young horse. The judge also had time to add a few pointers and Mike had the option of riding the test again. He opted for schooling the canter instead, and with the judge encouraging him to let her open up, they rode the canter much better....Trainer Mike tends to be a bit conservative, we both realize that our young horses have years and years to develope, we don't not want to push too hard..... but the judge really encouraged him to let her go more forward , accept contact, as she totally trusts him, and it was lovely. I brought Legacy home after the show, and put her to babysitting youngsters. We also confirmed yesterday that she is in foal to HeartBreaker for a spring 2010 foal. That is exciting news, both the parents of this foal are dressage winners! Proving their potential out in the public, in open shows against all sorts of other breeds.....We are very excited about this young filly's talent, our very first homebred to hit the show ring, and a huge future in the world of dressage. Legacy also has a whole lot of growing left to do, at 15.2HH as a 3 year old, we are excited about what she can do for our program. The judge also commented on her gaits, her MIND and her potential, when she grows into her gangly body as she matures.....This is one very awesome curly filly.
Posted by Linda @ Creekside Curlies at 1:47 PM